The French migrants from Béarn in San Francisco 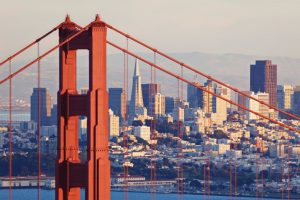 California is not yet a member of the Francophone and Francophile Cities Network of America. Nevertheless, a city like San Francisco would benefit from showing its French past which was very bright in the second half of the 19th century. But this past is widely forgotten.

At that time, San Francisco developed while benefiting from the dynamism of the French immigrants from the Béarn (South West region of France in the Pyrénées), who contributed a great deal into the economy. The Ligue Henri IV is a fraternal organization based in San Francisco which was founded by French immigrants from the Béarn in 1895. Today this organization (850 members) is the largest Francophone association in Northern California.

It is now essential that Francophones and Francophiles of San Francisco join forces to restore the French past of the City. Let me tell you why… 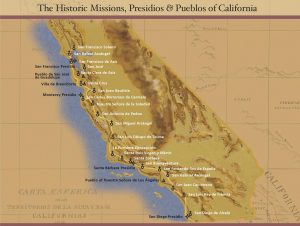 The missions, forts and towns of old California

In this first half of the nineteenth century, California is still a new world, part of the new independent Mexico in 1821. Twenty-one Spanish Franciscan missions there were implanted from 1769 to 1823 from San Diego to Solano (Sonoma) to evangelize the Indian population. The urbanization of the territory was completed by three towns (pueblos), in San Jose, Los Angeles and Branciforte (Santa Cruz), and four forts (presidios) in San Diego, Monterey, San Francisco and Santa Barbara.

The pueblo of Los Angeles, founded by Mexican settlers in 1781, became a small multi-ethnic, multicultural city, the largest in California. This is a real regional political and economic center which has developed its own identity, Mexican of California, based on cattle in large farms (ranchos).

Despite its remoteness, California develops trade relations with Mexico, New England, Russia and European countries, including France. It attracts French migrants arriving, mostly individually, from the west coast of France (Normandy, Brittany, Southwest). There is also francophone Belgians and French Canadians. Yet, Francophones are few, tens, and blend into the local population by marrying Mexican women in Monterey, the capital of California, Los Angeles or Santa Barbara. French remains the language of communication between them, which also gives them a real advantage in the political relations of the time [2]. 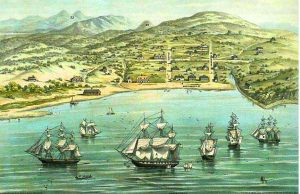 Village of Yerba Buena in 1847, renamed San Francisco before the Gold Rush

In this adventure, the migrants from the South-West of France excel. The first two Béarnais in California, Jose Maria Covarrubias and Henry Cambuston, arrive in the years 1830-1840, are hired as teachers in Monterey and integrate into powerful Mexican families [3]. Jean-Louis Vignes, an aptly named man from Bordeaux, arrives in 1831 in Los Angeles and is the first winemaker to market Californian wine.

What about the city of San Francisco in all of this? At that time, it is still a small settlement called “Yerba Buena”, located in a cove of the northeast of the San Francisco Peninsula between San Francisco Presidio and Mission San Francisco de Asis . It is far from the Mexican government and attracts little attention. However, after the Treaty of Guadalupe Hidalgo, on February 2, 1848, which ended the war between the US and Mexico, California becomes American and the village of Yerba Buena is renamed San Francisco to avoid confusion with the name of the cove. It will then experience an overwhelming growth at a key moment that will change the fate of California. That is the Gold Rush.

The solidarity of the pioneers of the Gold Rush 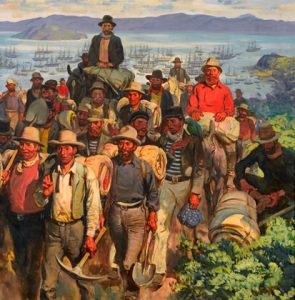 The discovery of gold on January 24, 1848 at Sutter’s Mill (Coloma), on the edge of the American River, northeast of the future city of Sacramento, triggers the Gold Rush in California. Gold seekers arrive massively in 1849 from the American continent, then from the whole world. They borrow at least initially the (long) sea route via Cape Horn or the Panama isthmus to access the San Francisco Bay by its “Golden Gate”. Was this passage actually named because of the Gold Rush? Not at all. This name was assigned, before the discovery of gold at Sutter’s Mill, by analogy with the “Golden Horn” forming the natural harbor of ancient Byzantium.

The consequences of this global movement are enormous. The ancient village of Yerba Buena (850 inhabitants), now San Francisco, lives a demographic explosion, with a population of 25 000 inhabitants in 1849 and 34,800 in 1852 [1]. At that time, at the height of the Gold Rush, it is still a pioneer town, messy and yet buzzing with activity, which must be organized gradually. In France, the Gold Rush attracts adventurers dreaming of wealth, including through a lottery supposed to promote free and voluntary emigration to California of 5000 unemployed factory workers. But the lottery is actually a pretext for the government to get rid of the revolutionaries of 1848 [4]. They are from 20 to 25 000 French people who came this time from all regions of France, many of whom had lived in Paris,  joining this global rush [5]. 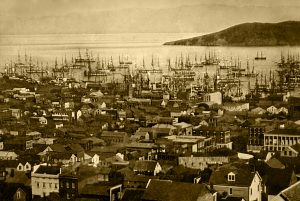 The harbor of San Francisco in 1851, during the Gold Rush

To survive in San Francisco, the French who are not gone to the mines get together and are soon so numerous that they eventually form a French Quarter around Montgomery and Commercial streets. They quickly found various institutions of the French community (consulate, nursing home, catholic church, theater …). But above all, they founded in 1851 a fraternal benefit society that offers free medical care and medicines, in exchange of a small monthly fee. This is the first mutual insurance company in the United States [5].

And the Béarnais in all this? They are present in the region of the mines and in San Francisco. If the sources do not distinguish their role during the Gold Rush, the records of the mutual aid society of San Francisco provide an interesting clue. In 1858, the western Pyrenees represent the largest number of contributors (39), before Paris (34), while there are many more immigrants from Paris [3]. One should probably see there a demonstration of solidarity that will result, at the turn of the century, in a true migration chain, beyond family circles and close acquaintances.

The Béarnais migration chain at the turn of century 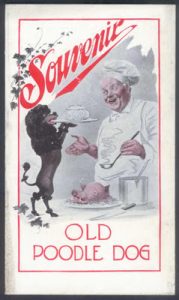 The French restaurant Old Poodle Dog, founded in 1849, was one of the most famous restaurants in San Francisco

In 1860, San Francisco is the largest city in California (56 800 inhabitants), before Sacramento (13 800) and well ahead of Los Angeles, which remained a small Californian town with about 5000 inhabitants. Numerous French stayed in San Francisco after the Gold Rush that has disappointed many. They represent a quarter of the population of the city [4] and deeply permeate the local economy. Because of their urban origin, they instill a true atmosphere of “Paris of the Pacific”. Gambling houses, the best restaurants, the best cafes and boutiques of the city are mostly French. But the French also excel in small street shops and gradually have a monopoly of some professions such as the importation of wine or hairdressing [5].

Meanwhile, the Béarnais are scattered in the city but do not form a distinct group. During the Gold Rush, they were rather young men of 28 years on average, mobile, adaptable, often merchants. Having found a place suitable to their professional activity, they are now encouraging the arrival of migrants from their region, which this time are even younger and more rural, ready to make the attempt. The migratory chain then starts up.

The few French areas at the origin of these chains are mostly mountain regions where demographic pressure is high and cultural traditions like the birthright are still influential [6]. This is the case of the western Pyrenees (Basques and Béarnais), Aveyron and Champsaur (Hautes-Alpes). Migrants and younger sons of the mountains are lured by the promise or hope of a job, but are more driven by ambition than by poverty [6].

At the end of the nineteenth century, San Francisco has a very attractive economic development for service activities where the French have invested heavily. The Béarnais follow the migration chain in San Francisco and go to work in laundries, tripe, as well as domesticity for girls and dairies for men [3]. Thus, the tripe and fertilizers factory, Bayle, Lacoste et Cie, founded in 1888, employs about 200 workers and favors the hiring of Béarnais [6].

But the laundry is really a Béarnais case. The first Franco-Béarnais laundry opened in 1862 and then the industry is organized. The Béarnais use the most modern equipment and provide better quality of service than, cheaper, Chinese and US industrial laundries. Between 1880 and 1920, they even manage to hold a virtual monopoly of the San Francisco laundries.

Migration channels then promote regional differentiation in two models of community solidarity, that of Béarn, of rather rural and Catholic origins, and that of Aveyron, instead of urban origin and socialist inspiration, often employed in the hotel and catering industry [3]. However, the community is only cultural and festive, with no specific organization to defend language rights, as in Canada. French children become Americans,  in an American society exerting strong pressure to assimilate them. After the first world war, immigration quota laws of the 1920s and the economic crisis of the 1930s make California less attractive, and sources of migration are also gradually drying up because the economic situation of the French mountain areas improves [3]. 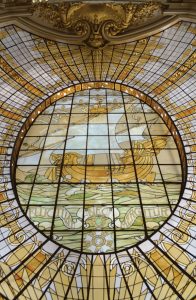 Glass rotunda of the old department store City of Paris, with the latin motto of Paris “Fluctuat Nec Mergitur” (It is tossed by the waves but does not sink)

The French of San Francisco helped develop the city since its inception and gave it their lifestyle. But many urban transformations mishandled the traces of this French presence. Who knows for example that the only thing left of the French department store City of Paris, founded in 1851, is the glass rotunda with the coat of arms of the city of Paris, visible inside the Neiman Marcus store at the corner Union Square [5]? Who will showcase the still visible historical heritage and make it known to the inhabitants and visitors to the city, whom are often unaware of it?

The league Henri IV, housed in the French Alliance building on Bush Street, still offers its members a highly sought annual banquet, with the color of their “old country”, Béarn. The league is open to new French members or descendants of French, by co-optation, regardless of their origin, although its steering committee is composed of members with ties to Béarn or some southwestern départements of France.